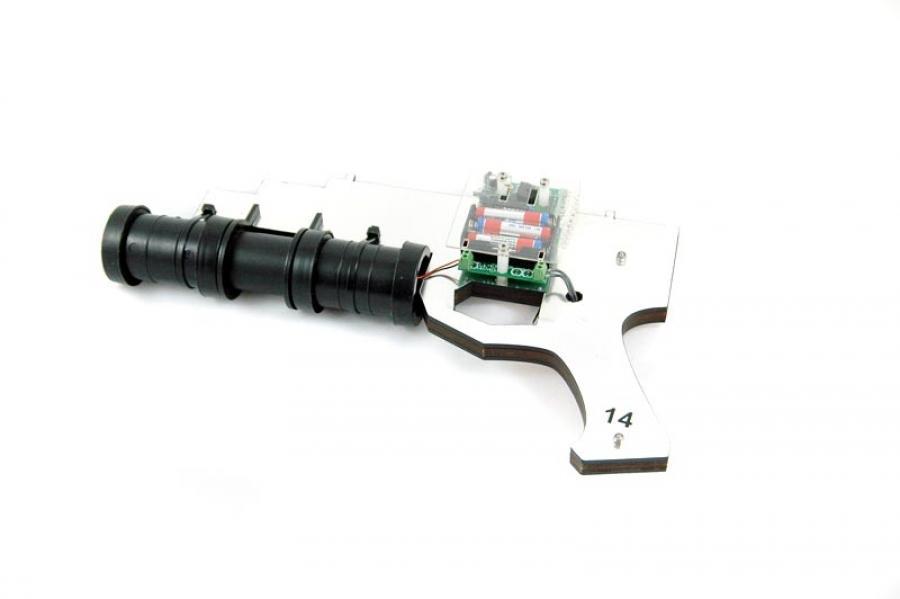 This is about the third version now of our laser tag system for Tech Camp. Every time we've built a batch with kids we've made it simpler. This time we decided that we needed just one main PCB; it now has the batteries, sensors, microcontroller, LED display bank and associate circuitry on it.

We've tested a batch out with kids and it's now possible for even those younger children who are new to soldering to be able to construct it all in a single day session. The main body is made of 4 layers; the two inside ones are 3mm MDF, and the two outside ones are a silver-coloured laser engraveable laminate. We've used the same optics setup as last time, but Jack was keen to increase the robustness by inserting two stiffening supports through which the black tube passes, which then slot into the main body. It is still secured with two cable ties and the combination of all this means that the optics are naturally pretty well aligned with the sights of the gun. Another minor change that has made them easier to construct is having the IR emitter PCB circular; this fits snugly in the pipe/connector system and doesn't require a separate mounting board.

It's turning out to be quite a sophisticated system now. Using a version of the same PCB set up as a 'control box', we can put the laser taggers into many different modes to play capture the flag, escort the VIP, and a version of 'domination' (where the winning team is the one who has control of the box for the longest throughout a fixed-time game). We can even download the scores to a PC using an IR USB dongle.

This picture is one of a bank of 20 that we've produced to take to parties and events. (Many thanks to Jack, Felix, Harry and Jenny for helping out with these!) The version that the kids will be producing this summer will be almost identical but be completely made of MDF so they can choose their own colour scheme.

We've just designed a new kit for The Science Museum and popped in tonight to see how the kids got on. It's for their Science Nights so it had to be simple; they have around 450 kids in each time they run it, in classes of 150 at a time!

We’re bringing you a whole new game design experience, with our Arcade Gamer course featuring the Microsoft Kitronix ARCADE Gamepad - a fully featured programmable gamepad for use with the MakeCode Arcade block editor.

Will COVID-19 increase our reliance on robots?

5 examples of how robotics can be used to aid humans

Twenty six planes all built, and all in the air! Twenty five came down (pretty much) intact. This is Greg just before the maiden flight. Sadly this one went straight in a tree but we were able to retrieve it today with the help of some very long ladders, poles, and the helpful people at Ufton Court.

Why you should play with your food

OK, so unless you've got a really strange craving, most of us wouldn't eat Corn Flour (Cornstarch for our US friends).  Nevertheless, this is one of the most cool things to play with, and you probably have it in your kitchen. It's a great thing to do with young kids, but if you're anything like our MD, you might well find it intriguing yourself.