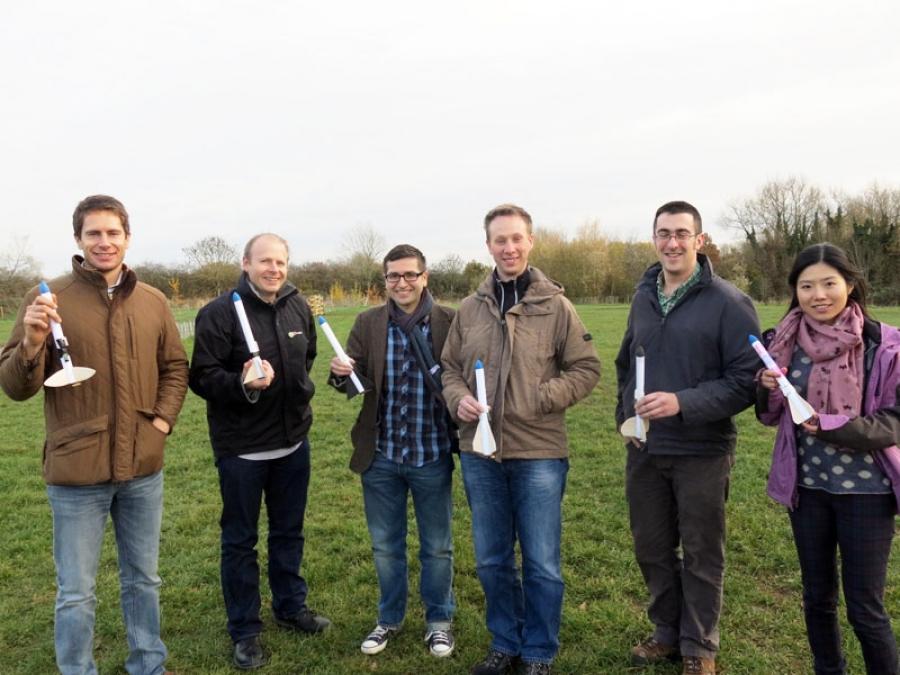 We've just finished running a rocketry activity at a corporate workshop for a BP team.  This is a great activity as it can be done at multiple levels with all ages and abilities.  With the more able (and adult) group that we had today we can cover a lot of ground in a few hours, exploring some theory as well as building and flying a couple of rockets.

I guess it makes a nice change from a team-building day making rafts ...

We started with a little introduction to the theory before starting a simple build to demonstrate the construction method and provide an opportunity to see how the rockets are put together and how they are launched.  The team members then made a second rocket from scratch, but this time trying to build the highest-flying model by minimising weight, and altering the recovery mechanism and other design features such as the fin shape.

We then attached electronic logging altimeters to the second set of rockets to see which designs worked the best.  It's worth looking at the image of the flight curves (below in the gallery).  The vertical axis is metres and the horizontal axis is the sample number.  There are 5 samples/second, so the longest flights are around 10 seconds.

There's always a bit of random variation in height due to wind and other uncontrollable factors, but the curves for the top two performers are interesting.  Ben had a very cut-down design, limiting the length (and therefore weight) of the main body, and removing excess weight as well from the fins and recovery mechanism.  Oliver kept a longer body length, but really worked on the fin design, choosing a more complex but hard to make elliptical fin, and rounding off the edges to make an aerofoil shape; this can not only reduce drag but actually reverse the drag of the fins as the aerofoil can generate lift.  Sadly the logger didn't work on one of the flights (Danlu's), but we were able to get a recording a second time using a more powerful ('B') engine - hence the impressive-looking curve for her model.  She recorded the top altitude of 68 metres for the day.

Knowing that the sample interval is 200mS allows us to calculate velocities and acceleration as well.  The steepest curve is Ben's, with a 21.6m rise between the second and third samples, meaning a speed of 21.6m/0.2s, or 108m/s (389 km/hr).

Some of the anomalies are worth a closer look.  Sometimes when we attach loggers you can see a clear pulse when the ejection charges fire.  It’s hard to see the ejection on these plots, perhaps because of the noise on some of the readings – possibly due to turbulence from the external mounting of the altimeter.  Ben’s flight curve has an interesting peak.   Occasionally there’s an errant reading which we can ignore, but if I remember correctly, Ben’s had a ‘tumble recovery’ system which ejected the motor before returning to ground.  If I’m correct here, then the sudden drop in altitude is most likely due to the reaction force produced when the motor ejects as at this stage the rocket is probably past its apogee and heading back towards earth.  A couple of the plots also show a negative peak in the altitude readings at the start of the graph.  Discounting the possibility that none of us noticed the rockets going backwards, the most probably explanation is again due to turbulence and/or excess air pressure created somehow on launch – possibly even the motor's thrust reflecting off the blast plate on the ground, although this is only speculation.    We also tried puting a camera on the final rocket flight but sadly we didn't get a recording for some reason).

Learn to Code - How to Get Your Children into Programming

As a parent, it can be difficult knowing where to start when it comes to getting your children started with programming. With more and more schools offering computer science for GCSE, and teaching programming instead of just Microsoft Office during ICT lessons, it has never been more important to get started early!

Discover Our Tech Camps In London

Do you have a child that loves technology and could make a career of it in the future?  If you’re looking for a holiday camp in London, why not choose Tech Camps to help them develop their skills?  Whether you’re looking for residential or day camps, Tech Camps offer both these options in London and a variety of other locations.

Get the balance right…

Only men being techies is a stereotype up to a certain point, but with the male population providing the lion’s share in the digital industry, questions are being asked why women are in the minority of employees in this field.  It could be argued that boys are given remote control cars, planes, trains, robots and drones as presents and therefore are introduced to technology from an early age – or at least that was the case maybe a decade or so ago.

On Friday night we began the long road trip North to Newcastle for the Maker Faire, with Tech Camp regular Felix and our new employee Pedro, who will be joining us in June. We eventually got to the Centre for Life in Newcastle, an amazing science museum/exhibition space/research facility that was the venue for this year’s UK Maker Faire.