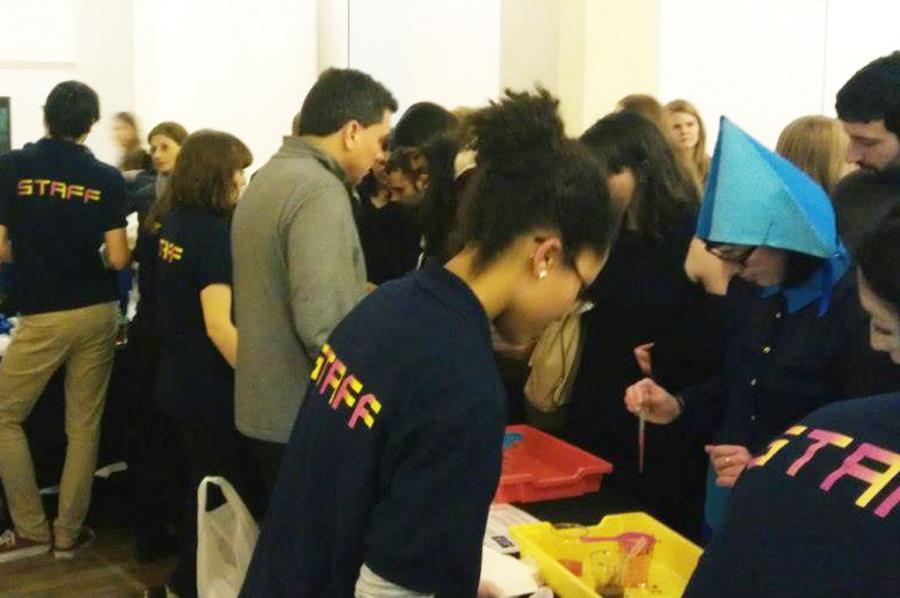 It's a simple but fun demonstration using two food-grade chemicals that react together to form a skin around droplets of whatever flavoured-liquids you are using. The chocolate (and orange) mixtures contain sodium alginate (an algae derivative used commonly as a thickener in foods), and the water bath contains extra calcium ions. It is common to use calcium chloride, but we've ended up in most of these workshops using calcium lactate as it doesn't have a noticeable taste, so the caviar droplets don't need rinsing afterwards, making for a much quicker walk-up workshop.

It's always a popular experiment for people to do as you can eat the product of the reaction, and tonight was no exception. We think we had well in excess of 1000 people come through over the couple of hours we were there.

Many thanks to our Tech-Camp regular, Felix who stepped in for a little while at the start to help out when we were obviously in need of some help! (We didn't realise he was coming but he thought he would drop in with some friends from Imperial College next door, and fortunately he was even wearing the Tech Camp t-shirt!)

The Positives of Video Games

Video games get a lot of bad press, but are they really that bad?

Just finished our Easter Test Pilot again and had a terrific time.  We had an Easter event last year but this time around we wanted to run a really small event just to try out our new courses for 2016.  We figured this would both give us an incentive to develop the courses in a more detailed manner longer before the summer and also to be able to use the feedback of the campers to improve things for when we’re inundated with hundreds of campers in a few months’ time.

Myself and Tom have spent the week down at Forres Sandle Manor school in the New Forest, running a 'Rockets and Robotics' programme for 14 children. At the end of each year, the school have a 'project week' where all the children choose from a wide range of activities to do for the week, such as cycling, needlecraft, sports and even trips abroad.