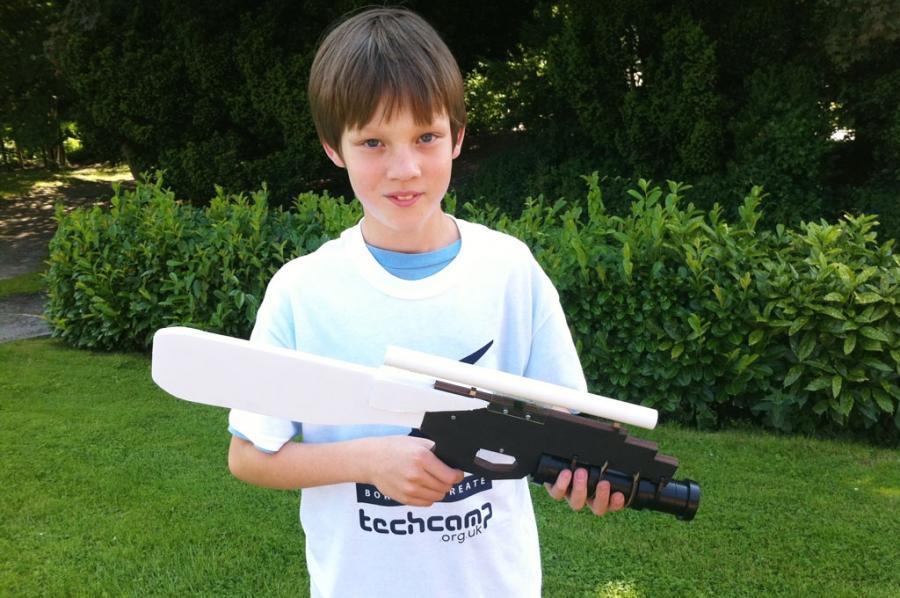 The kids did quite a few other activities at this event, solving a crime using forensic techniques, and building/launching their own rockets. I spent most of the weekend mucking around with prototypes for the RC planes that we'll be building with the older kids in a couple of weeks, and adding features to the laser tag software. Over the course of the week we've really managed to improve the game play, with modes for games like 'capture the flag' and 'domination'. We can no programme the units instantly by holding a 'control box' up to them and pressing a button. This enables us to very quickly setup game parameters like game length, lives, respawn ability, etc. Now we've got these features, we've found that we've hardly used the score downloading ability at all as it always seems more fun to play the team-based games than keping track of individual's scores.

Last day of the Tech Train today! We've had a great week, seeing all sorts of science demonstrations, and participating in a variety of workshops from Lego Mindstorms to biotechnology. Today was mainly sightseeing, with trips to the Camera Obscura and Edinburgh Castle. Tonight we will be having a tour of the underground medieval streets before heading back to London on the sleeper train.

With technology now so central to our modern lives, it can be difficult to know how to keep ourselves safe online, let alone keeping our children (who seem to know more about it than we do) safe too! To help out with this, we have created a brand-new course for this year, Cyberspy Academy, designed to teach children all about digital security and staying safe online.

A Tech Camp Biosphere - 4 years on!

We recently received an email from one of our campers way back in our second year (2009) when we ran a biotech course. One of the projects was to make your own biosphere, a sealed self-sustaining ecosystem. We would have been impressed with one year, but this one is still going strong after four! If anyone else still has a biosphere, please do send us a picture!

We've just finished running a rocketry activity at a corporate workshop for a BP team.  This is a great activity as it can be done at multiple levels with all ages and abilities.  With the more able (and adult) group that we had today we can cover a lot of ground in a few hours, exploring some theory as well as building and flying a couple of rockets.