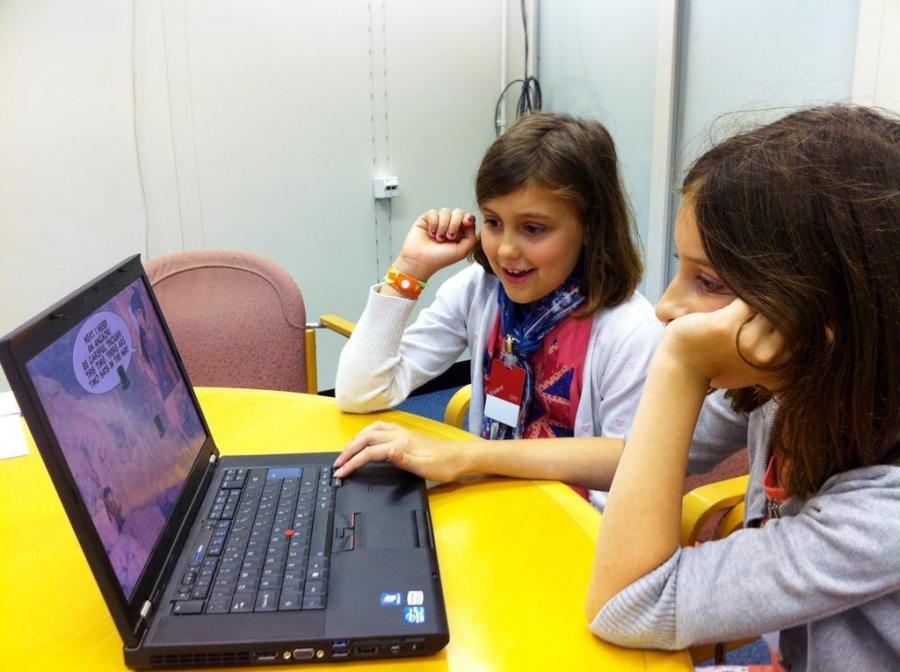 We brought a small group of kids who ran through the game scenarios, whilst the staff there (actually summer interns) observed how the kids navigated around their creation.

It was an interesting project; an attempt by them to introduce kids to programming by providing them with some simple games where they had to modify some basic parameters to solve the levels (such as the movement speed of the character). The system provided prompts re: what to change in the programme, which allowed the children to get a gradual introduction to programming by modifying existing programmes.

Although their games were designed for the Raspberry Pi, much of the testing was done on laptops just for convenience, but the children also got an introduction to what the Raspberry Pi was about, and also went on a tour of the IBM museum.

The project was part of IBM's summer programme where they get a bunch of interns each working on different creative projects. Shortly after our visit the young team building this project were to compete against other IBM summer teams in an internal competition. (If you guys won, please let us know and we'll update this!)

IBM have one of the better intern programmes around and attract some of the best UK university students as the places are highly coveted. With any luck we'll see some Tech Camp graduates there one day soon!

Status of our Summer Camps

At the moment, our summer camps are open for booking as normal.  Of course it is possible with COVID19 it may not be possible to run them, but almost all of the parents we've asked so far are keen to keep their bookings open in case that they do go ahead, and we realise what a welcome relief camp will be when all the social distancing is finally gone for children to be out doing something exciting and not being stuck at home!

On Wednesday Townley Grammar School celebrated their STEAM day, one of their three annual off-curriculum days. We were glad to take part in this celebration. It was great for us to work exclusively with girls as sometimes our technology workshops are seen more as boy’s activities, which is not the case.

Twenty six planes all built, and all in the air! Twenty five came down (pretty much) intact. This is Greg just before the maiden flight. Sadly this one went straight in a tree but we were able to retrieve it today with the help of some very long ladders, poles, and the helpful people at Ufton Court.

Supported by Lewis Hamilton and with partners/sponsors such as Allianz, BMW and Twitter, professional drone racing has become a worldwide success.

The Positives of Video Games

Video games get a lot of bad press, but are they really that bad?