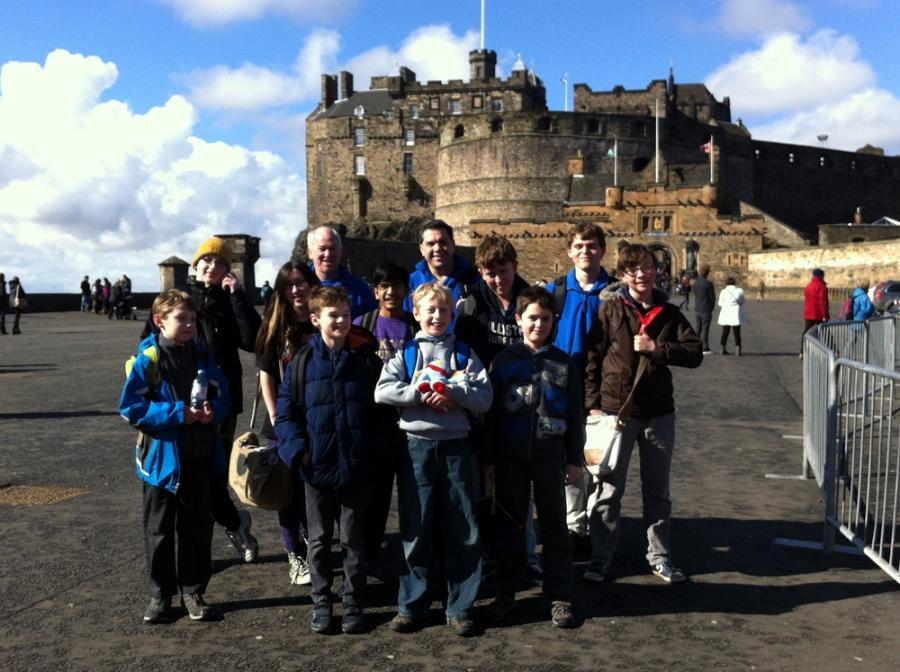 Monday was spent at the Science Festival itself in the City Arts Centre, and the kids went to workshops on robot building, CSI and forensics, Lego Mindstorms programming and soldering their own electronic gadgets at Madlab. A few decided to make Morse code telegraph style devices with rather loud buzzers, which drove us all mad for the rest of the week.

We spent Wednesday at the amazing National Museum of Scotland, looking round the incredible recently refurbished exhibits and watching a chemistry show full of exciting demonstrations and explosions. In the afternoon we saw a very hi-tech presentation from the robotics department of Edinburgh University on intelligent robots. They had brought along some of their humanoid robots they travel with all over the world taking part in 5 a side robot football! Some of us got the chance to challenge a robot at ‘rock, paper scissors’ and the robot won almost every time. For the finale Ben and Alex got to control a robot with hand gestures using an Xbox Kinect camera, and race another robot moving on its own to kick a football! After supper we went out for a movie night at the cinema – a late night for everyone.

The final day was spent sightseeing with a tour round Edinburgh Castle and the Scottish Crown Jewels, followed by a packed lunch and a visit to the Camera Obscura and the World of Illusions, a museum dedicated to visual tricks and optical illusions such as holograms and mirror mazes. There was also an observation deck at the top with amazing views of the city and the Royal Mile. Then we had a brisk walk to a sightseeing ‘Horrible Histories’ bus tour of Edinburgh, which everyone enjoyed as there was no walking involved! Our final activity was a visit to Pizza Hut for supper followed by a ‘Ghosts and Ghouls’ tour of the underground Edinburgh streets – some of us decided we didn’t want to go on the tour as our feet were very tired (definitely not because we were scared of ghosts and the dark). With that our 3 youngest campers, Ben, Jordan and Luke along with Alex set off to go underground. A few of us might have been a little scared at times but everyone was sad when it was over!

After another late night and a delayed train or two we finally made it back to King’s Cross on Friday afternoon where the children met up with their parents – a great trip enjoyed by all. Hopefully we will see some of you again in the Summer!

To see all the photos from the trip please visit our Facebook album.

An exciting day today; Tech Camp has taken on it's first employee (well, sort of ...) Jack has been a Tech Camp regular for several years now and has convinced me to take him on for a year as an intern/gap-year student. I'm really looking forward to working with Jack; he is not your regular 18 year old ...

For the Young Inventor ...

If you're up for a stocking filler, (only 300 days to Christmas!), or just want to encourage a young (or old) inventor, this is one of our favourite products.  Sugru is a product that's hard to explain.  They call it 'mouldable glue'.  Think blu-tack that sets to a silicone rubber.  This means that if you can make something out of play-doh, you're qualified to use this, and what you create is not only flexible and impact-resistant, but also temperature resistant as well, as silicone rubber is the substance used to make the modern rubberised style of oven mitt.  Create grips for cables, protective bumpers for phones, wheels for your next robot, and much more.  From only £15 for a multi-colour 8-pack, it's cheap enough to buy a pack just to play with.  https://sugru.com